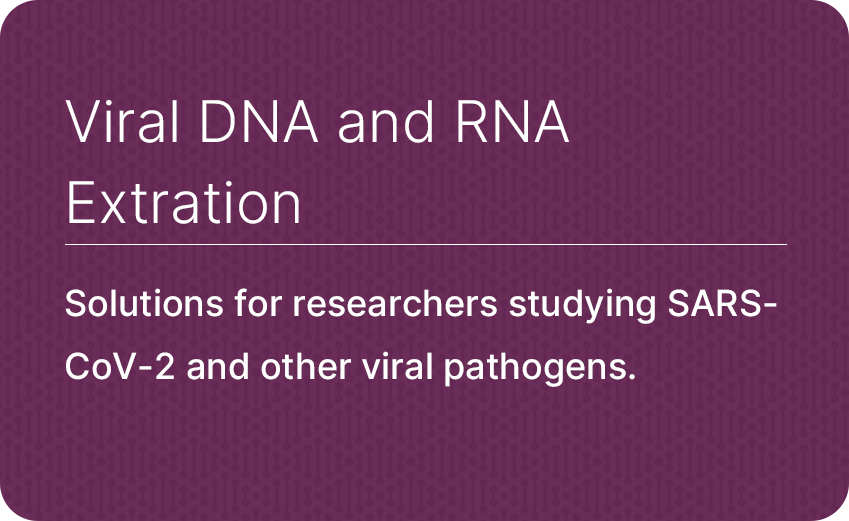 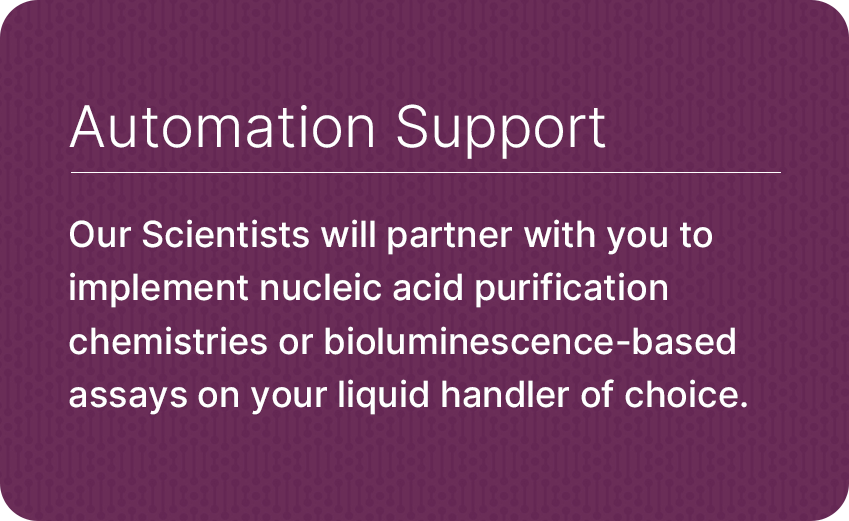 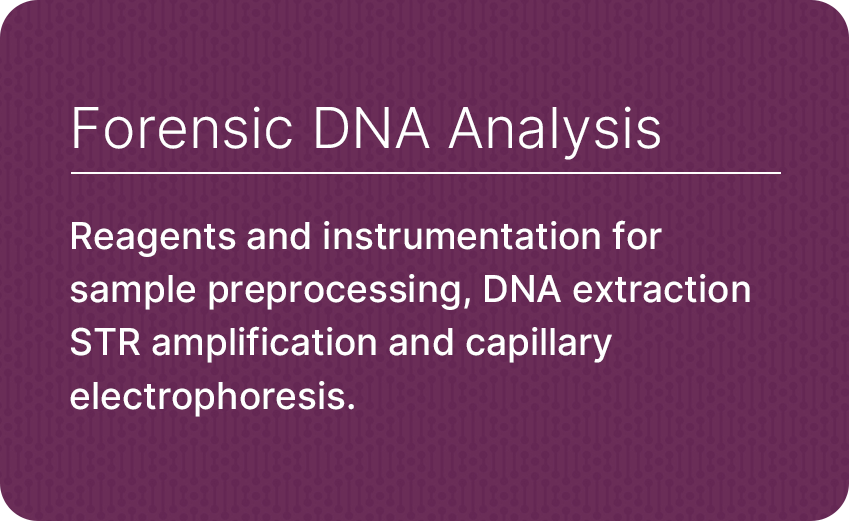 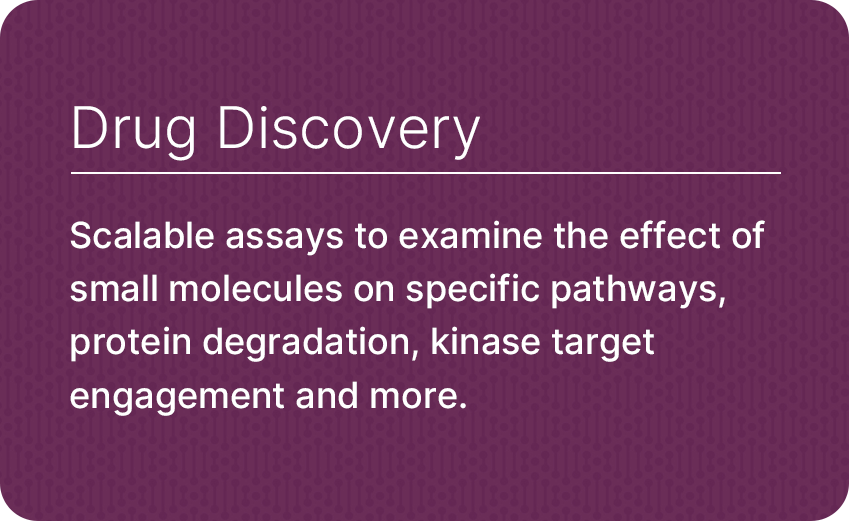 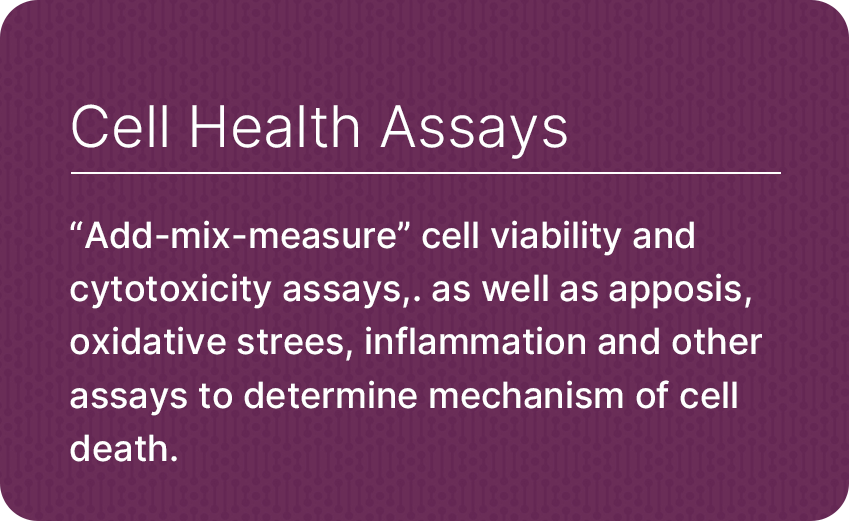 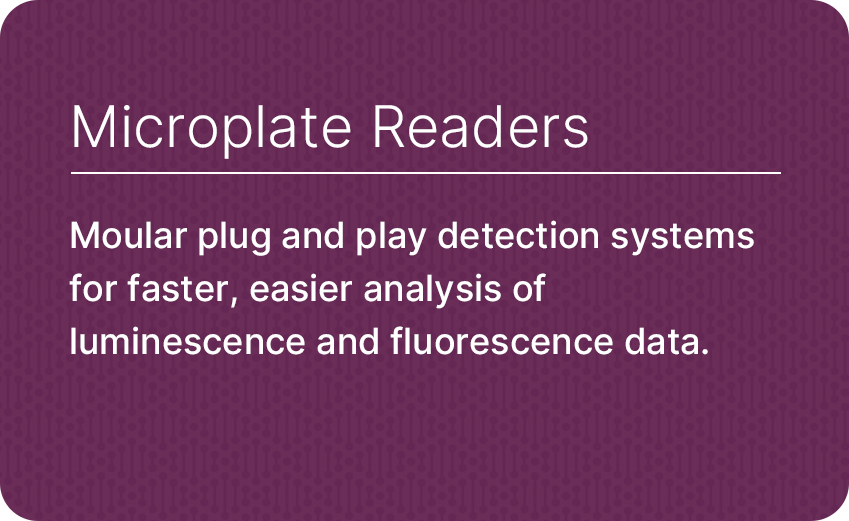 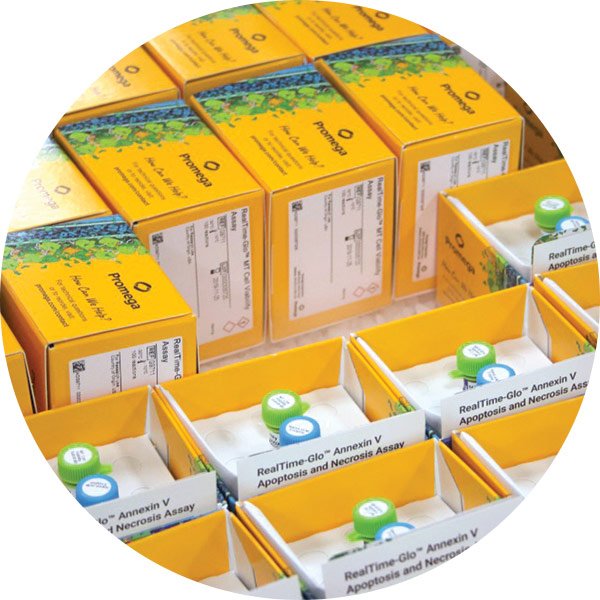 Specific combinations of chemistries that allow customers to carry out  laboratory tests in the fields of cell biology; DNA, RNA and protein analysis; drug development; human identification; and molecular diagnostics. 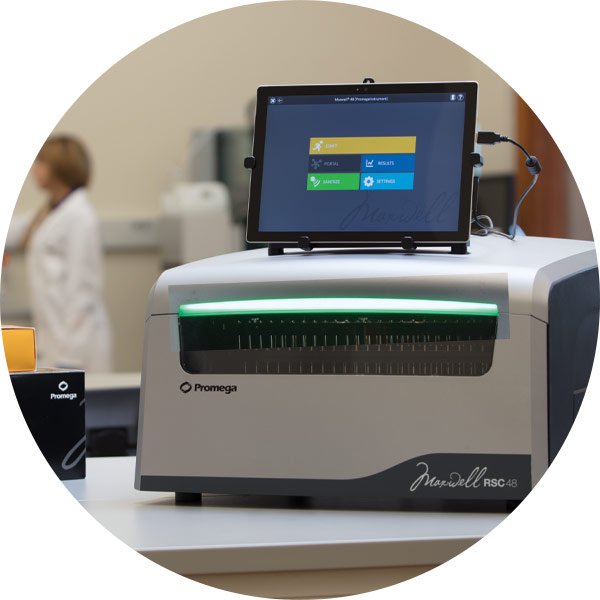 Instrumentation that allows customers to automate their various research and lab procedures, increasing efficiency and precision.

Where Our Products Are Used 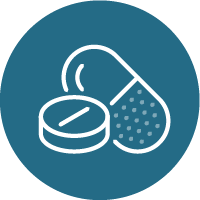 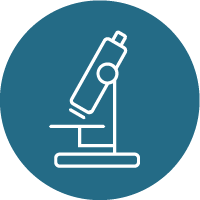 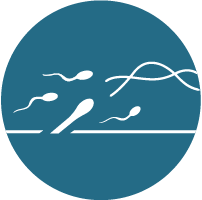 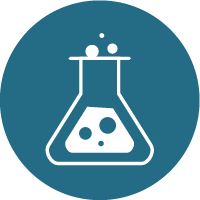 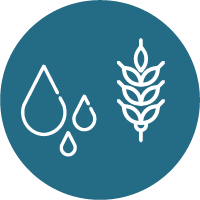 We have a 100 year mindset to keep asking questions that change the world. Promega exists on an evolutionary frontier where the values of science, business and human well-being intersect.

Read more about our purpose and values.

Instrumentation that allows customers to automate their various research and lab procedures, increasing efficiency and precision. 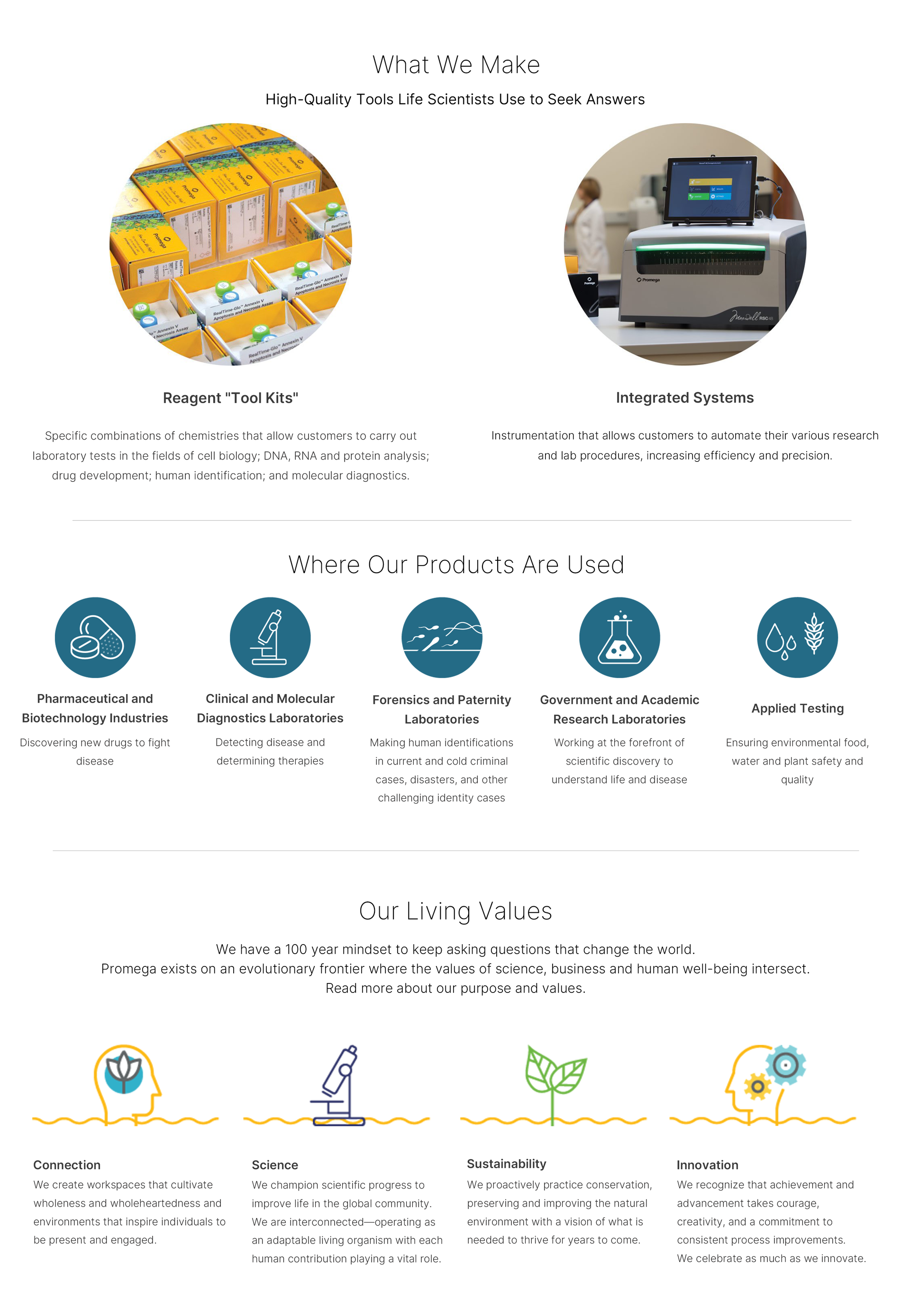 Although thalidomide (Thal) was initially used to treat multiple myeloma (MM) because of its known antiangiogenic effects, the mechanism of its anti-MM activity is unclear. These studies demonstrate clinical activity of Thal against MM that is refractory to conventional therapy and delineate mechanisms of anti-tumor activity of Thal and its potent analogs (immunomodulatory drugs [IMiDs]). Importantly, these agents act directly, by inducing apoptosis or G1 growth arrest, in MM cell lines and in patient MM cells that are resistant to melphalan, doxorubicin, and dexamethasone (Dex). Moreover, Thal and the IMiDs enhance the anti-MM activity of Dex and, conversely, are inhibited by interleukin 6. As for Dex, apoptotic signaling triggered by Thal and the IMiDs is associated with activation of related adhesion focal tyrosine kinase. These studies establish the framework for the development and testing of Thal and the IMiDs in a new treatment paradigm to target both the tumor cell and the microenvironment, overcome classical drug resistance, and achieve improved outcome in this presently incurable disease.

Thalidomide (Thal) was originally used in Europe for the treatment of morning sickness in the 1950s but was withdrawn from the market in the 1960s because of reports of teratogenicity and phocomelia associated with its use. The renewed interest in Thal stems from its broad spectrum of pharmacologic and immunologic effects.1 Because of its immunomodulatory and antiangiogenic effects, it has been used to effectively treat erythema nodosum leprosum, an inflammatory manifestation of leprosy.2 Potential therapeutic applications span a wide spectrum of diseases, including cancer and related conditions, infectious diseases, autoimmune diseases, dermatologic diseases, and other disorders such as sarcoidosis, macular degeneration, and diabetic retinopathy.3 Recent reports of increased bone marrow (BM) angiogenesis in multiple myeloma (MM),4 5coupled with the known antiangiogenic properties of Thal,6provided the rationale for its use to treat MM.7Importantly, Thal induced clinical responses in 32% of MM patients whose disease was refractory to conventional and high-dose therapy,7suggesting that it can overcome drug resistance because of its alternative mechanisms of anti-MM activity. Besides alkylating agents and corticosteroids, Thal now, therefore, represents the third distinct class of agents useful in the treatment of MM.

Given its broad spectrum of activities, Thal may be acting against MM in several ways.8 First, Thal may have a direct effect on the MM cell and/or BM stromal cell to inhibit their growth and survival. For example, free radical–mediated oxidative DNA damage may play a role in the teratogenicity of Thal9 and may also have anti-tumor effects. Second, adhesion of MM cells to BM stromal cells both triggers secretion of cytokines that augment MM cell growth and survival10-12 and confers drug resistance13; Thal modulates adhesive interactions14 and, thereby, may alter tumor cell growth, survival, and drug resistance. Third, cytokines secreted into the BM microenvironment by MM and/or BM stromal cells, such as interleukin (IL)-6, IL-1β, IL-10, and tumor necrosis factor (TNF)–α, may augment MM cell growth and survival,12and Thal may alter their secretion and bioactivity.15 Fourth, vascular endothelial growth factor (VEGF) and basic fibroblast growth factor 2 (bFGF-2) are secreted by MM and/or BM stromal cells and may play a role both in tumor cell growth and survival, as well as BM angiogenesis.5 16 Given its known antiangiogenic activity,6 Thal may inhibit activity of VEGF, bFGF-2, and/or angiogenesis in MM. However, Singhal et al.7 observed no correlation of BM angiogenesis with response to Thal, suggesting that it may not be mediating anti-MM activity by its antiangiogenic effects. Finally, Thal may be acting against MM by its immunomodulatory effects, such as induction of a Th1 T-cell response with secretion of interferon gamma (IFN-γ) and IL-2.17Already 2 classes of Thal analogs have been reported, including phosphodiesterase 4 inhibitors that inhibit TNF-α but do not enhance T-cell activation (selected cytokine inhibitory drugs [SelCIDs]) and others that are not phosphodiesterase 4 inhibitors but markedly stimulate T-cell proliferation as well as IL-2 and IFN-γ production (immunomodulatory drugs [IMiDs]).15

In this study, we have begun to characterize the mechanisms of activity of Thal and these analogs against human MM cells. Delineation of their mechanisms of action, as well as mechanisms of resistance to these agents, will both enhance understanding of MM disease pathogenesis and derive novel treatment strategies.

Thal and analogs (Celgene, Warren, NJ) were dissolved in DMSO (Sigma) and stored at −20°C until use. Drugs were diluted in culture medium (0.0001 to 100 μM) with < 0.1% DMSO immediately before use. The Thal analogs used in this study were 4 SelCIDs (SelCIDs 1, 2, 3, and 4), which are phosphodiesterase 4 inhibitors that inhibit TNF-α production and increase IL-10 production from lipopolysaccharide (LPS)–stimulated peripheral blood mononuclear cells (PBMCs) but do not stimulate T-cell proliferation; and 3 IMiDs (IMiD1, IMiD2, and IMiD3), which do stimulate T-cell proliferation, as well as IL-2 and IFN-γ secretion, but are not phosphodiesterase 4 inhibitors. The IMiDs also inhibit TNF-α, IL-1β, and IL-6 and greatly increase IL-10 production by LPS-stimulated PBMCs.15

MM cells (1 × 106) cultured for 72 hours in media alone, Thal, IMiD1, IMiD2, and IMiD3 were harvested, washed with phosphate-buffered saline (PBS), fixed with 70% ethanol, and pretreated with 10 μg/mL of RNAse (Sigma). Cells were stained with propidium iodide (PI; 5 μg/mL; Sigma), and cell cycle profile was determined by using the program M software on an Epics flow cytometer (Coulter Immunology, Hialeah, FL), as in prior studies.20

In addition to identifying sub-G1 cells as described above, apoptosis was also confirmed by using annexin V staining. MM cells were cultured in media (0.01% DMSO) or with 10 μmol/L of Thal or 1 μmol/L IMiD1, IMiD2, and IMiD3 at 37°C for 72 hours, with addition of drugs at 24-hour intervals. Cells were then washed twice with ice-cold PBS and resuspended (1 × 106cells/mL) in binding buffer (10 mmol/L HEPES, pH 7.4, 140 mmol/L NaCl, 2.5 mmol/L CaCl2). MM cells (1 × 105) were incubated with annexin V-FITC (5 μL; Pharmingen, San Diego, CA) and PI (5 μg/mL) for 15 minutes at room temperature. Annexin V+PI− apoptotic cells were enumerated by using the Epics cell sorter (Coulter).

To characterize apoptotic signaling, MM cells were cultured with 100 μmol/L of Thal, IMiD1, IMiD2, or IMiD3; harvested; washed; and lysed in 1 mL of lysis buffer (50 mmol/L Tris, pH 7.4, 150 mM NaCl, 1% NP-40, 5 mmol/L EDTA, 2 mmol/L Na3VO4, 5 mmol/L NaF, 1 mmol/L PMSF, 5 μg/mL leupeptin, and 5 μg/mL aprotinin), as in prior studies.22 Lysates were incubated with anti-related adhesion focal tyrosine kinase (RAFTK) Ab for 1 hour at 4°C and then for 45 minutes after the addition of protein G–agarose (Santa Cruz Biotech). Immune complexes were analyzed by immunoblotting with anti-P-Tyr Ab (RC20; Transduction Laboratories, Lexington, KY) or anti-RAFTK Abs. Proteins were separated by electrophoresis in 7.5% SDS-PAGE gels, transferred to nitrocellulose paper, and analyzed by immunoblotting. The antigen-antibody complexes were visualized by chemiluminescence.

Statistical significance of differences observed in drug-treated versus control cultures was determined by using the Studentt test. The minimal level of significance wasP < .05.

Treatment of MM patients with Thal

Response to thalidomide in multiple myeloma*

Effect of Thal and analogs on DNA synthesis of MM cell lines and patient cells.